An Accra High Court has finally granted bail to the 12 suspects allegedly involved in the Bawku Chieftaincy disturbances which led to the loss of lives and the destruction of properties.

The decision comes after several attempts by lawyers for the accused to be granted bail by the Circuit Court.

The suspects have been charged with unlawful assembly with offensive weapons and offensive conduct to the breach of peace.

All 12 however pleaded not guilty to these charges. 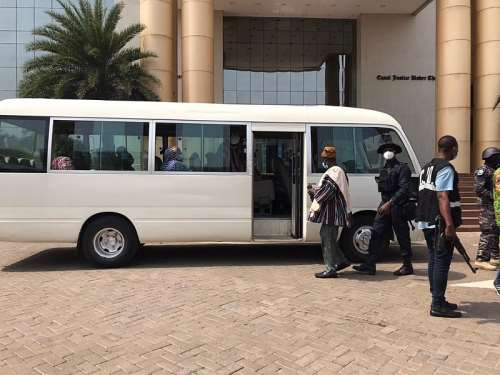 They are expected to reappear before the court on February 12, 2022.

The 12 suspects were arrested following a renewed chieftaincy clash in Bawku last Monday, January 3, 2022, which led to the loss of lives and the destruction of property. Court refuses to grant 12 suspects bail

The court had earlier refused to grant the 12 suspects bail.

There was serious disagreement at the Circuit Court 4 in Accra on Wednesday, January 5, 2022, as lawyers clashed over a bail application for the 12 accused persons.

The accused persons, according to the Prosecution, had violated a curfew in Bawku, and a restraining order, to perform the funeral rites of a chief who died almost 40 years ago, and at the same time to enskin a new chief for an area that already has a chief.

Leading the prosecution, Vivian Osei Tutu of the Attorney General’s department said there will be chaos and anarchy in Bawku if the 12 accused persons are granted bail.

She said that the security situation in Bawku was already volatile, and that granting the 12 accused persons bail would only heighten the already precarious situation.

Lawyer for the accused persons, Martin Kpebu, however disagreed with the facts as asserted by the Prosecution.

He described the accused persons as responsible and respectable people, some sub-chiefs with hundreds of thousands of subjects under them.

According to Mr. Kpebu, the accused persons had not enskinned a new chief, neither did they cause any chaos or anarchy in Bawku.