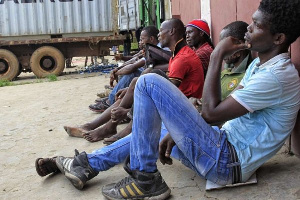 Professor Samuel Kobina Annim, the Government statistician, said the unemployment rate among the population aged 15 years above was 13.4 percent and higher for females with 15.5 percent and 11.6 percent for males.

He said about half a million of 487,470, representing 2.5 percent of persons aged 15 years above were first-time job seekers with almost equal proportion of males of 2.5 percent and 2.4 percent females.

Also, more than two in five, representing 45.5 percent unemployed persons aged 15 years above were available for work but not seeking for employment, of which the youth between 15-35 years constituted 65.8 percent.

The figure shows that economic activity among males, which was 63.5 percent was higher than females of 53. Percent, with more pronounced variation in the rural areas of 63.6 percent for males and 51.5 percent females.

Also, the figure stated that involvement of children in economic activities in Oti Region of 20.8 percent was more than six times the national figure of 3.2 percent and prominent in five regions- North East, Savannah, Upper West, Northern and Upper East.

In Greater Accra, children’s involvement in economic activity is mostly in service and sales, constituting 42.6 percent and children aged 5-14 years engaged in economic activity has 80 percent of them involved in agriculture-related activities with the highest proportion in Savannah of 89.8 percent and the least in Greater Accra of 26.2 percent regions.

The public sector engages about 10 percent of the employed population aged 15 above, of which 60 percent are males.

The Government Statistician said the focus of the Census was to provide quality data about the unemployment situation, especially among the youth for policymakers to act.

“Our interests here are first-time job seekers and those who are available but not seeking for work and from the data that we have collected, we are prompting policy makers.

“Indeed, some of these people have given up on the economy and this is where we need to rethink for intervention”, he said.

Source: GNA
Related Topics:census
Up Next