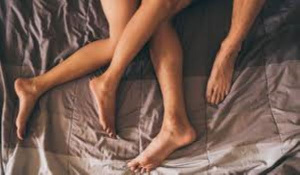 While the heat is on, you may think there is no boundary as to what to say or touch, but be careful, you may kill the fun while touching these places.

Sex is always a moment of pleasure that intimate partners often take informally. Lovers usually have no boundaries to their pleasurable activity while the moment is on.

However, the lovemaking process is very sensitive and couples should curtail the habit of placing their hands on some sensitive parts of the genitals which are listed below.

If you reach her cervix during sex, recognize that something is wrong. Remember, this is the narrow canal that connects the vagina to the womb. That isn’t a place you want to go to, so don’t try to touch her there.

For starters, it’s painful for her to have something rammed against her cervix, and it could be a sign that you need to shift for a position with shallower penetration.

We know the clitoris is a super-sensitive zone and has a lot of nerve endings, but stimulating the head of the clitoris vigorously can turn out to be an intense and painful experience for her. Imagine gulping a cup of piping hot coffee immediately followed by an ice-cold beverage. The feeling is not pleasant, right? Instead, try rubbing around in circles or simply at the shaft of the clitoris.

Don’t touch her feet if she’s wearing socks! Wondering why? According to a study from Johns Hopkins University, wearing socks in the sack can increase the chances of having an orgasm. This logic applies to men as well. Another reason is that women need to be completely relaxed to climax, and cold feet can be an uncomfortable distraction.

You may think that it is strange yet this one is genuine – no lady prefers her hair to be pulled or entangled during sex when she has gone through hours (and wasted thousands!) in the salon on them.

Assuming that she’s breastfeeding or going to menstruate, try not to squeeze the nipples. It harms beyond your imagination.