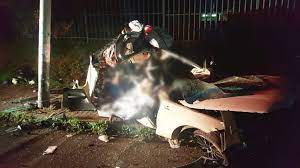 A total of eight people have been killed, and four are fighting for their lives following three separate car crashes between Friday night and Saturday morning in Gauteng.

Two accidents occurred in Pretoria, while another was in Parktown.

Emer-G-Med paramedics were called to the scene of a serious vehicle accident on the N4 west, between Donkerhoek and Boschkop, just before midnight.

A heavy-duty vehicle had collided with a stationary minibus taxi. When the paramedics arrived, they declared four occupants of the taxi dead.

According to Emer-G-Med spokesperson Kyle van Reenen, one other occupant suffered moderate injuries and was treated and stabilised on the scene before being taken to a nearby hospital for further care.

In Pretoria East, paramedics responded to a multi-vehicle collision on the R104 between Solomon Mahlangu and Donkerhoek.

“Reports from the scene are that a female around 35 years of age suffered fatal injuries and was declared dead on arrival of paramedics. Three people suffered injuries ranging from minor to moderate and were treated and stabilised on the scene before being taken to a nearby hospital for further care.” On Saturday morning, another crash occurred on Annet Road in the Parktown area.

Van Reenen said that when they arrived on the scene, they saw the mangled frame of a BMW, which had come to rest against a street light.

“Closer inspection found two occupants entrapped in the wreckage with fatal injuries, they were declared dead on arrival,” he said.

A third occupant was found to be in a critical condition, and several advanced life support intervention methods were used in an attempt to stabilise him while he was being taken to a nearby hospital for further care.

He was declared dead on arrival at the hospital.

Previous Do you know what my mother has done? Go and ask – Shatta Wale angrily responds
Next Russia continues assault on Ukrainian cities as it moves to surround Kyiv