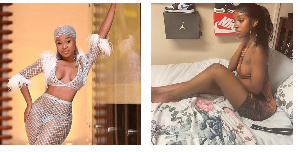 Actress Efia Odo and internet star, Bhadie Kelly have been trending on the internet from the eve of Thursday, June 8. It all began when a video from a TikTok user, Bhadie Kelly went viral.

In the said video, Bhadie Kelly was spotted wearing a tight mixed brown bodysuit attire while she dance flirtatiously to a viral TikTok song. Kelly’s sudden fame made many fans, most of whom are men, compare her to Ghanaian actress and show host, Efia Odo.

Largely, the comparison has been about their beauty, ability to dance and seductiveness.

This GhanaWeb article would compare both internet personalities on their careers, social media followership, beauty, net worth and awards to determine who the true “Queen” is among the two.

Bhadie Kelly is a Togolese socialite who rose to fame after a TikTok dance video of hers went viral.

Whereas, Efia Odo, born Andrea Owusu was a U.S-based assistant nurse who relocated to Ghana to pursue her dreams in acting and the media in general.

Technically speaking, a specific career path cannot be pointed out for Bhadie Kelly but there’s no doubt that she is an active social media user with very responsive followers.

On the other hand, as mentioned earlier, Efia Odo is an accomplished actress with major awards to her name.

In 2018, Efia Odo won the best actress award in Ghana. She was once a television presenter with Kwese Sports.

On social media, both personalities can boast of huge followings. On Instagram, for instance, Kelly has over 200K followers, while Efia Odo has over 2.6M followers.

The issue of beauty is a dicey one because beauty lies in the eye of the beholder. Both personalities are very beautiful and attractive and as such their beauty can be distinguished using their ages as a defining factor.

Now, you decide for yourself who the most beautiful among them is. Here are videos of the ladies from their social media pages.