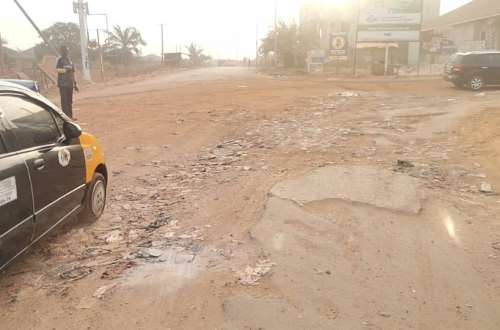 Some industrial players, motorists and commuters plying the Asokwa industrial area and Sokoban Wood village road have said the deplorable state of the road is constantly affecting productivity.

According to them, the poor nature of road networks in the industrial area has increased production cost forcing them to lay off workers.

Some business owners at Sokoban Wood village in an interview with the reporter on Tuesday, December 21, 2021, said the roads linking other roads in the industrial area has become very deadly due to challenges to route access.

They have thus increased their campaign to get authorities to fix portions of the road that has deteriorated.

Mr Kofi Owusu, a businessman at Sokoban-Wood Village explained that the campaign had intensified because their cargo cars have been falling off the road.

“Honestly industrial players and residents in the Asokwa and Sokoban enclave are unhappy about the bad condition of the roads.

“We have recorded several accidents in the past months leading to loss of lives and properties,” he added.

Another businessman said most of their customers have stopped patronizing their wares because the situation caused inconveniences to them when they ply the road.

They have thus appealed to the Ashanti Regional Minister, the Ghan Highway Authority, Urban Roads and other stakeholders to step up efforts to improve the condition of the roads.