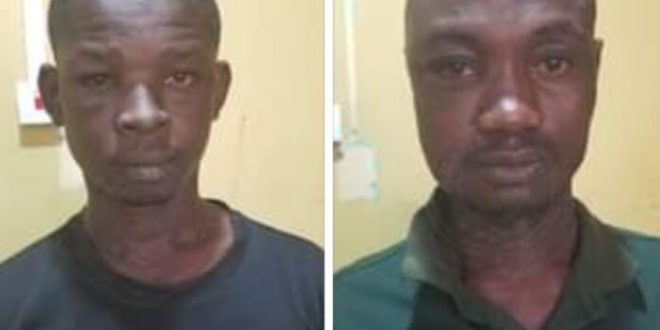 Two armed robbers who were arrested by the police in Kumasi in the Ashanti Region have been sentenced to 20 years imprisonment each for robbery.

The two, Emeka Opara and Samuel Kalo, were arrested on May 30, 2022, following their attack on a victim at ECOBANK, Abrepo Junction, where they succeeded in bolting with a bag containing an amount of Thirty Thousand Ghana Cedis (GHC 30, 000.00).

They were arrested by the police and subsequently prosecuted, while the amount of GHC 30, 000.00 was also successfully retrieved.

A statement released by the police on Thursday urged the public who are able to link the two to other crimes to reach them for further action.

“Because the two have been duly convicted and are no longer suspects, we have displayed their images in line with our new standard operating procedure.

“Any member of the public who can recognise any of them in connection with other crimes, should kindly contact the nearest police station for further action.

It added: “We would like to assure the public that the Police will continue to fight crime and bring criminals justice.”

Previous The king in this African nation never dies
Next Monkeypox: Another excuse for Akufo-Addo’s administration – Manasseh Azure Awuni