Home / GENERAL NEWS / Accra floods: How people were running for their lives 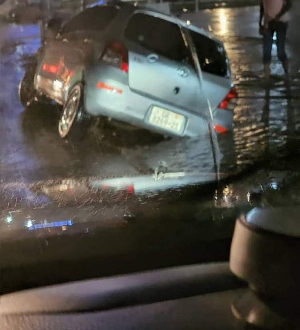 Accra floods: How people were running for their lives

About five hours of heavy rainfall yesterday in Accra caused severe flooding and disrupted activities in many parts of the capital city and beyond.

Some of the affected areas include the Tetteh Quarshie Interchange, Spintex, Madina road, the Sahara Park in Adabraka, Ablekuma, parts of Teshie, the Obetsebi Lamptey roundabout, and parts of Dzorwulu.

A number of frightened traders run to seek shelter under the median of the interchange as others waded through the floodwaters to board vehicles to their destinations.

Some passengers who were using the interchange to other destinations preferred to walk in the rain to avoid the huge traffic that has built up due to the downpour.

Commercial vehicles from the Obra Spot ‘Trotro’ Station had to wait a little longer because the floods had blocked the road leading to Paloma Bus Stop.

The popular Las Palmas eatery was not spared as the ravaging floodwaters took over the entire ground floor forcing customers who were eating to abandon their meals for safety on the second floor of the two-story building.

Some parts of the Spintex Road were also heavily flooded forcing stores and businesses along the road to close abruptly.

To avoid any danger, some motorists parked their vehicles and had to wait for the level of water on the road to subside before continuing their trips.

Some part of the Tema Motorway was also flooded which forced some drivers to use only the outer lane of the Tetteh Quarshie Roundabout, to Tema.

Some of the traders in anger lamented the engineering work during the development of the interchange for the floods.

Tags ACCRA FLOODS FOR How LIVES RUNNING THEIR WERE