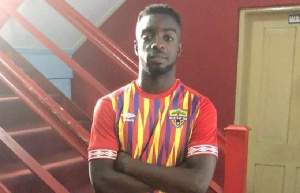 Accra Hearts of Oak SC are closed to losing three of their top stars in the coming weeks after break in negotiations, 442gh.com exclusively reports.

The capital based side endured a checkered form in their title defense and are now confined to building a new empire with some known faces closer to the exit door.

With the arrival of new faces like Sulley Ali Muntari and Salim Adams into the starting XI of the Phobians, Samuel Boadu and his technical team appeared to have endorsed the departure of some key players across the 2020/21 treble winning campaign.

Midfield duo of Abdul Aziz Nurudeen and Fredrick Ansah Botchway could be leaving for pastures anew with juicy offers on board.

The deal is expected to materialize in the summer that will see the former Vision FC ball winner joining the European side.

Former Liberty Professionals architect, Fredrick Ansah Botchway, is reportedly on his way out of Accra Hearts of Oak SC in search of first team football after dropping down the pecking order.

His destination is not known for now though there are offers both locally and outside the shores of Ghana.

The third player closer to the exit door is long serving right back, Sumaila Larry Ibrahim.

The committed servant has largely been used as a back up despite his blistering pace and is now closer to leaving the reigning champions for pastures anew.

Accra Hearts of Oak SC recently embarked on rebuilding by snatching 10 talented youngsters from the lower tier of Ghana football.