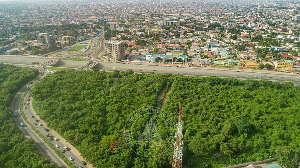 It has emerged that some members of the governing New Patriotic Party, NPP, have already acquired some portions of the Achimota forest lands even before the government returns the peripherals of the forest to its custodial owners, identified as the Owoo family.

Page 5 of the Last Will and testament of Kwadwo Owusu Afriyie (Sir John) available to GhanaWeb shows that the late CEO of the Forestry Commission together with one Charles Owusu has already secured parts of the Achimota Forest lands.

Sir John in his will wrote that he owns 0.987 acres of the Achimota Forest land and he gives his portion to his nephews, Michael Owusu, Yaw Boadu and Kwabena Amoateng, forever.

Immediately after copies of Sir John’s last Will was made public, the Ministry of Lands and Natural Resources, in a statement indicated that it has requested all documents relating to the Achimota lands, as part of an initial inquiry to ascertain the veracity of the claims which are contained in the will of Sir John.

“Considering that the issues that form the basis of the allegations predate the tenure of the current Minister, Hon. Samuel A. Jinapor, MP, it is important that he is seized with the full facts to enable him to take appropriate action, if, indeed, there is any merit in the claims.

“The Ministry assures the general public and the good people of Ghana that it will ensure that the national interest is protected at all times, especially in matters pertaining to the Achimota Forest,” the statement signed by the PR Unit of the ministry concluded.

There was a news report suggesting that the Government had gazetted an Executive Instrument (E.I.) to approve the redesignation, sale or development of Achimota Forest.

A document from the Ministry of Lands and Natural Resources, making reference to an E.I., stated that the Achimota Forest Reserve is to no longer be regarded as a forest reserve.

He explained further that the government is returning to its custodial owners, identified as the Owoo family because the land was not being used for its intended purpose, which included the extension of the Achimota School.