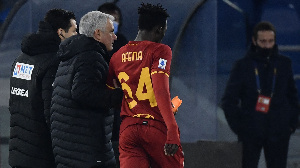 Felix Afena-Gyan was involved in AS Roma’s journey to the final in the new competition created by UEFA.

Jose Mourinho led AS Roma beat Dutch side Feyenoord 1-0 to win their first major trophy since 1961.

Nicolo Zaniolo scored for AS Roma in the 32nd minute which was enough for Roma to secure the trophy.

Afena-Gyan was on the bench throughout Roma’s encounter with Dutch side Feyenoord on Wednesday evening.

Striker Felix Afena-Gyan made three appearances for AS Roma in the Conference League. He played against Bodo/Glimt, Leicester City and Vitesse.

Felix Afena-Gyan will celebrate this major achievement which is his first in his professional career with his teammates and fans who have supported him after breaking into the Roma senior team.

Previous Leaving an abusive relationship is a gradual process – Actress
Next Pregnant Nigerian woman, her 4 children killed a day after police found severed head of politicians in same state