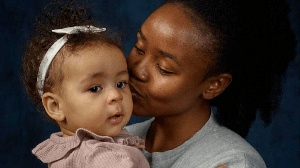 14-month-old Kenyan Ayah Lundt was born healthy and hitting all the developmental milestones as the months went by.

Her parents noticed things were off from when she was nine months and now they are racing against the clock to raise over $2 million to cover treatment for a rare degenerative disease that affects mostly infants.

Baby Lundt was diagnosed with spinal muscular atrophy type 2 (SMA) in November 2020. SMA is a rare genetic disease found in 1 in 10,000 children across the globe which kills nerve cells and causes infants’ muscles to deteriorate.

It can lead to difficulty swallowing or breathing. Usually, children diagnosed with SMA do not survive past early childhood due to respiratory failure.

However, Lundt’s parents are hoping they could get their hands on the one-time treatment drug, Zolgensma. The gene therapy treatment is approved for use for children before the age of two.

The baby’s mom, Mary Mithika, and dad, Frank Lundt, seemingly need to raise the money on their own to get the treatment in the US where the drug was approved by the FDA in 2019 to be used on children under the age of two.

Also, because the drug is not covered by universal healthcare in Denmark where they live, the Lundts have resorted to family, friends, and social media to raise $2.1 million before their little girl turns two.

“I think about the cost every day, and it weighs me down,” Mithika, originally from Kenya, said through tears, CNN reported. “And then I look at Ayah and see her getting worse. As a parent, what would you do if you knew there’s something out there that can save your child?”

When Lundt was nine months old, her parents noticed she could not eat, crawl, raise her head while sleeping or clap like she used to. Mithika could not wrap her head around what was happening to her 14-month-old who was now struggling to eat oatmeal with a spoon, something she had enthusiastically done before.

Due to these and many other alarming symptoms, they spoke with a nurse who visits to check on the baby monthly. The nurse referred them to a doctor. Lundt was diagnosed with spinal muscular atrophy type 2 on November 27. Mithika has come to terms with the fact that her baby might never walk again even with the treatment.

Nonetheless, the Lundts have not given up hope of getting the rare gene therapy for their baby and they are on standby with the hopes that they can raise the money before her condition deteriorates.

The entire treatment and care for a patient with SMA could “cost up to $6 million in the first 10 years of a patient’s life,” Novartis Gene Therapies president Dave Lennon told CNN.

The family has managed to raise $60,000 via GoFundMe. Family and friends are also helping out via the social media campaign “Friends of Little Ayah” which was launched by the baby’s parents. Lundt, who has a two-year-old sister named Amira, currently uses a wheelchair to aid in mobility.

“She’s like a four-month-old trapped in a 14-month-old’s body,” Mithika said. “She gets frustrated she cannot move. When her older sister dances around her, she tries to join her from the wheelchair but she can’t. Every patient is different. But in just the last few weeks, she’s deteriorated so much.”

The $2.1 million single-dose treatment is not a guaranteed cure, according to experts, but the powerful intravenous dose is one sure way to keep Lundt breathing, alter her genetic expression and improve muscle function.