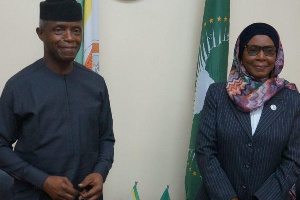 The African Court on Human and People’s Rights have expressed concern that more African States are yet to ratify the Protocol and make the Declaration under Article 34 (6).

Lady Justice Imani D. Aboud, African Court President, explained that Article 34 of the Protocol [Ratification] stipulates that “at the time of ratification of this Protocol or any time thereafter, the State shall make a declaration accepting the competence of the Court to receive cases under Article 5(3) of this Protocol.

“The African Court shall not receive any petition under article 5 (3) involving a State, which has not made such a declaration”.

The African Court President stressed that: “The Court may entitle relevant Non-Governmental Organizations (NGOs) with observer status before the Commission, and individuals to institute cases directly before it, in accordance with article 34(6) of this Protocol”.

The African Court President noted 54 of the 55 Member States of the African Union (AU) have ratified or acceded to the African Charter on Human and Peoples Rights with the exception of Morocco and have therefore committed themselves to respecting the principles set out therein.

In the absence of such a Declaration, the application must be submitted to the Banjul Commission first, which may then – after preliminary examination – decide to refer the case to the Court.

The six countries who have ratified and deposited the declaration are: Ghana, Burkina Faso, Malawi, Mali, Tunisia, and Gambia.

She however said in spite of the challenges the African Court was doing its best in the circumstance.

“I think that more countries would be willing (to identify as required with the Court). I think that governments just require more assurance especially on the issue of compartmentalization”.

The Nigerian Vice President expressed strong faith in the work of the African Court, stressing: “I believe very strongly in the International and Regional Court system, especially with respect to the protection of human rights”.

He commended the achievements of the African Court in spite of many challenges: “I really must commend you for the work you are doing, and landmark rulings.

“Many have followed your work, especially when cases are about protection of the rights of women and freedom of information and I think there is consensus that the African Court’s handling of these cases has generally pointed in the right direction.”

The African Court is to enhance the protective mandate of the African Commission by strengthening the human rights protection system in Africa and ensuring respect for and compliance with the African Charter on Human and Peoples’ Rights, as well as other international human rights instruments, through judicial decisions.

Why Nkrumah gave Guinea US$10 million after their independence