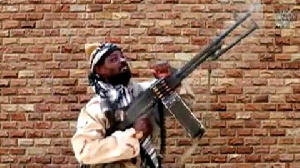 • The Boko Haram leader is reported to have died after an attack from fighters of a rival group, ISWAP

• Shekau has been the leader of Boko Haram since 2009 following the death of the group’s founder, Mohammed Yusuf

HumAngle, a website focused on conflict reporting in the Lake Chad region said it had verified the death from multiple sources.

This incident took place on Wednesday evening (May 19) following the invasion of the terror group’s stronghold in the Sambisa forest area by a column of Islamic State West Africa Province (ISWAP) fighters, the HumAmgle report said.

ISWAP, originally part of Boko Haram, broke off from the main Shekau-led Boko Haram group in 2016.

Boko Haram at the time and till date pays allegiance to Al-Qaeda whiles ISWAP pledges alliegiance to the Islamic State (ISIS) group.

Shekau’s enclave was tracked down by ISWAP using its forces based in the Timbuktu Triangle. His fighters were killed in the process, followed by a long gunfire exchange between the invading group and Shekau’s bodyguards, the report added.

HumAngle said Shekau’s bodyguards were subdued after which he surrendered and agreed to voluntarily relinquish power and ask his fighters to pledge allegiance to ISWAP.

The deliberations took place in the famous Sambisa forest where Shekau has been headquartered. He apparently blew up a hidden suicide vest he had on, killing all persons around him.

• Shekau had been the leader of Boko Haram since 2009 following the death of the group’s founder, Mohammed Yusuf.

• He had been rumoured to have been killed about five times in the last decade.

• One key instance was in Aug. 2016, when the Nigerian Air Force claimed he had been “fatally wounded” by military bombardments, but the terror group released a video only a month later showing he was alive and in good health.