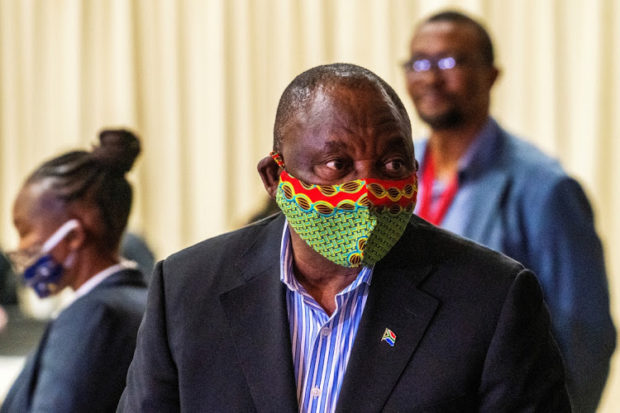 President Cyril Ramaphosa said on Monday night that a decline in the number of new cases meant the country could begin to ease some of the restrictions.

President Cyril Ramaphosa announced on February 1 2021 that SA will remain on adjusted lockdown alert level 3 but he said that many restrictions will be lifted. These include the ban on the sale of alcohol, restrictions on faith-based gatherings and a shortening of the curfew. Ramaphosa also elaborated on SA’s vaccine progress after the first batch arrived in the country.

Among the changes were:

“These changes have been made possible by the significant reduction in Covid-19 hospital admissions across all provinces, reducing the pressure on beds and hospital personnel,” said Ramaphosa.

However, Ramaphosa said that some restrictions would remain, including the ban on social gatherings and political events. Sports enthusiasts will also have to wait a bit longer to watch their favourite teams battle it out at stadiums, as this still remains prohibited.

The maximum number of 50 attended at funerals — long considered super-spreader events — still remains in place as well as the compulsory wearing of masks in public spaces.

“Even as we roll out the vaccination programme throughout the year and as we steadily work to reduce the number of new infections, we will need to continue to observe careful precautions to reduce transmission,” Ramaphosa said. “This is particularly important as the new variant of the virus — 501Y.v2 — is now widespread across the country.”

Ramaphosa urged citizens to avoid crowded spaces and spending time in closed and unventilated spaces as the risk of getting infected were higher in such spaces. As such, people will also still have to maintain a 1.5 metre distance when in public spaces, and employers have been urged to allow staff to continue working from home.

Ramaphosa said the number of new Covid-19 cases in SA had been consistently on the decline, along with the number of hospital admissions. It was for this reason that the decision was taken to ease some restrictions.

“In fact, the average rate of new infections has been steadily coming down over the last three weeks, indicating that we are past the peak of the second wave,” said Ramaphosa.

However, he closed his address with a warning that the country couldn’t become complacent, even though the peak of the second Covid-19 wave has now passed.

With the first batch of vaccines arriving in SA on Monday, Ramaphosa said it was possible to “imagine a world where the virus has been brought under control”.

“It is up to us not to let down our guard, and to prevent a third wave of infections. It is up to us to protect ourselves, our families and our communities. It is also up to us to get vaccinated as soon as we are eligible and stop the virus from spreading any further.

“Above all, it is up to us to keep the flame of hope alive and to remain determined in our commitment to one another and to our country. I am confident that, together, we can overcome,” said Ramaphosa.