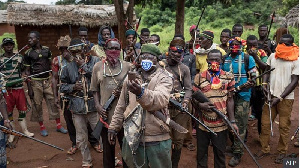 Police in France have arrested a former presidential guard from the Central African Republic (CAR) for alleged war crimes and crimes against humanity.

Eric Danboy Bagale was taken to Paris after his arrest in eastern France on Tuesday, the AFP news agency reports.

He is accused of leading a group of largely Christian militias which carried out revenge killings after the CAR’s president was ousted in 2013.
Thousands of people died in the violence that followed.

The CAR has faced instability since gaining independence from France in 1960.

But in 2013, Muslim rebels from the Seleka umbrella group seized power in the majority-Christian country.

Mr Bagale has been indicted for both his actions as head of former President François Bozizé’s guard and later as head of the mostly Christian anti-Balaka militias, according to the AFP news agency.

The former president is himself the subject of UN sanctions over the actions of anti-Balaka militias.

A peace deal was signed between the government and 14 armed groups last year, but the violence has continued.

More than a million people have been displaced or forced to leave the country, according to the UN refugee agency.

Related Topics:Central African Republic
Up Next

Teacher, 57, faints and dies in classroom