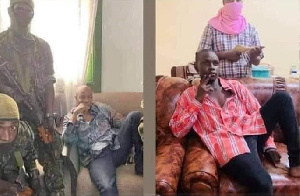 Guineans are making light of the recent political developments in the country with the whereabouts of President Alpha Conde still unknown since last Sunday.

Conde was placed under arrest by special forces and his government dissolved with the coup officers decrying corruption and mismanagement of resources.

Leader of the coup, Mamady Doumbouya, has since promised a unity government in weeks after meeting with some top officials of Conde’s government on Monday.

A photo that became emblematic in the early hours of the coup was one that captured the president seated on a sofa in jeans and African print surrounded by masked gun wielding soldiers who are seen talking to him and asking him to confirm that he is okay.

It is this photo which has widely been shared on social media and used n=by international media outlets, that Guineans are recreating in jest to events of Sunday.

Most recreators are seen seated on a sofa mimicking the exact pose of Conde, one leg on the sofa and hand on chin.

Another photo showed Conde seated behind a vehicle sandwiched by soldiers who at the time are believed to be taking him to an unknown location as at the time of filing this report.

Zuma’s family and relatives eagerly await his return to Nkandla