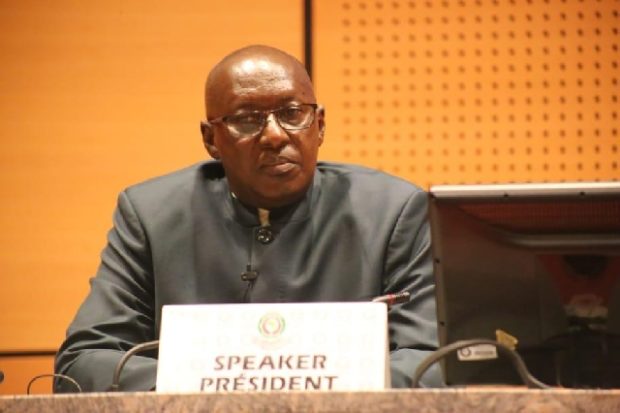 The Speaker of Parliament of the Economic Community of West African States (ECOWAS), Dr Sidie Mohamed Tunis, among other dignitaries, has arrived in Winneba for the High-Level ECOWAS Parliament Interactive Summit and the 2021 Second Extraordinary Session of the sub-regional body scheduled to happen from Wednesday, 13 October to Friday, 22 October 2021.

The summit would bring together about 110 delegates from the 15-member states of ECOWAS to discuss matters that pose a threat to the efforts to fortify democracy and political stability in the sub-region.

The event would be held on the theme: “High-Level Evaluation on Two Decades of Democratic Elections in the ECOWAS; Achievements, Challenges and the Way Forward.”

The Chairman of Ghana’s eight-member delegation to the ECOWAS Parliament, Mr Alexander Afenyo-Markin told Accra-based Peace FM: “In the history of ECOWAS Parliament, this is the first time such a meeting is held outside the capital city at Winneba”.

“We take a look about Western Africa, our stability is questionable and democracy, too, there is a bit of problem”, he noted.

He said there are insecurities all over, adding: “If you take a look from the Saharan region to Niger, Mali to Burkina, it’s a bit hectic”.

“The whole programme is to review our democracy, political, economic situation for the past 20 years and to make serious recommendations as a parliament for the authority of heads of State”.

He said “these are the main issues we would be discussing in Winneba” and noted that “experts, resource persons of high repute, whose name I cannot mention; but we have the former president, former diplomats in the sub-region, coming and the programme is of high-powered personnel.”

Mr Afenyo-Markin gave an assurance that Winneba was ready to host the event as sufficient preparations had been made, in terms of infrastructure and logistics.

“The whole thing is that we are selling the Effutu Gomoa enclave. The poverty in the Central region is a bit harsh. For some time, the Eastern and Volta regions have opened up their economy. Now, I have been in parliament for the past 9 years; 95% of all workshops and conferences are held in either Volta or Eastern regions.

“We are going to the Central region this time. I have a responsibility and it’s my duty to sell Effutu to the world. This is because when you come to the enclave, Effutu has nice beaches among other things”.

“We are developing that enclave; whether you are a native of Gomoa, Effutu, Ekumfi, we are all one people. Tourism potentials need to be explored and we can only do that if we are united”.

The lawmaker said hosting the ECOWAS parliament at Winneba in the Central region, should be seen as an opportunity for “visitors to see that after Greater Accra, we have Central Region”.

He noted that the region has coastal belts with nice cities, adding: “We are taking advantage of this to say Winneba is going to be the gateway to the Central region and once you enter, you are in for beauty, pleasure and profits”.

The summit, he added, would create business opportunities for taxi drivers, market women, restaurants, ushers among others.

He said because of the COVID-19 pandemic, hotel businesses were down but through this summit, “all the hotels in Winneba are booked”.