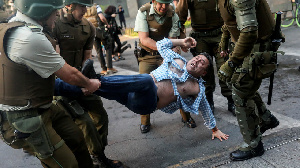 It’s a heart wrenching scene in the occupied West Bank in Ramallah.

Palestinians help to evacuate those wounded during clashes with Israeli security forces.

The incident occurred at a protest to voice concerns against the latest round of tensions.

Calls for a ceasefire continue to mount following the escalating attacks.

Egypt and France have expressed deep concern over the issue.

On Monday, the two added their voice for truce to end the violence between Israel and Palestinians in Gaza.

In Egypt, Trucks head to the Rafah border crossing this north African nation in order to send food and 65 tons of medical aid to the Palestinians.

50 ambulances have also been dispatched to transport injured victims to Gaza.

According to the Egyptian ministry of health, this is to help alleviate the unfolding humanitarian crisis in the region.

TV Presenter slaps woman on live TV during an interview