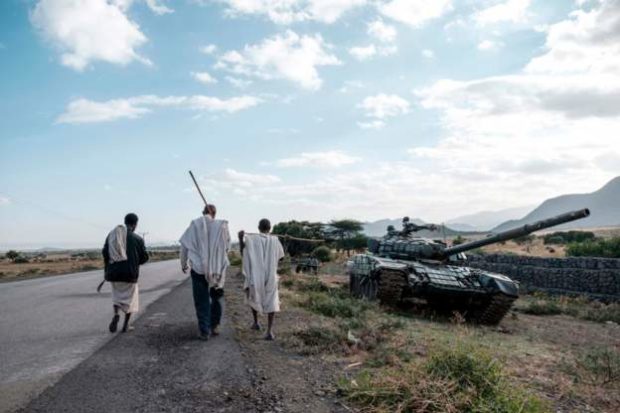 Ethiopia plans to close two camps in the northern state of Tigray that have been caught in the fighting between the state’s formers ruling party and the federal government, according to the country’s refugee agency.

Speaking to journalists on Tuesday, head of the Ethiopian Agency for Refugees and Returnees Affairs (Arra),Tesfaye Gobezay, said that the proximity to the Eritrean borders and harsh geographical conditions are reasons for the decision to shut the camps.

Nearly 100,000 Eritrean refugees lived in four camps in Tigray before fighting broke out in early November. Two of the camps – Shimbela and Hitsats – that had more than 20,000 refugees, have not been accessible for aid agencies recently.

Shimbela is located 20km (12 miles) from the Eritrean border in violation of accepted global principles that a refugee camp should be at least 50km away from borders, Mr Tesfaye said.

He added that the refugees will be moved to other camps or integrated into society.

Recently the UN had said that around 20,000 Eritrean refugees are not accounted for.

According to Mr Tesfaye there have been previous attempts to close the Hitsats camp, but those efforts failed due to a refusal from the state’s former rulers, the Tigrayan People’s Liberation Front (TPLF) and the coronavirus pandemic.

“There was a lot of fighting around those camps” and the refugees “were caught in the crossfire”, Mr Tesfaye said.

But further investigations are needed to determine the details of the damages and possible deaths.

These fans have ended the Davido and Burna Boy music feud, they say Burna Boy is better