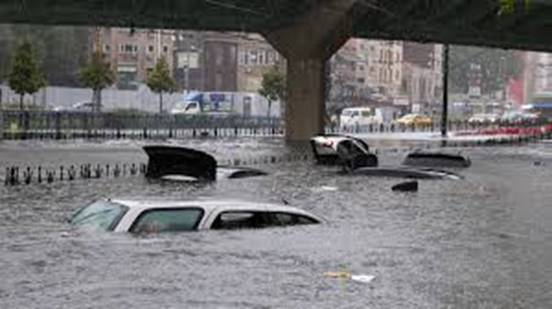 Okecheme was on his way to the Nnamdi Azikiwe International Airport in his official 2017 Toyota Camry when his vehicle stalled in the flood water at Galadimawa Roundabout, Abuja.

It was gathered that Okecheme’s car was following a Toyota Highlander SUV which successfully navigated the flooded road.

His vehicle reportedly lost power and his attempts to restart the engine failed. He and his driver were said to have climbed on the car roof as the level of the water increased.

They reportedly spent a long time shouting for help but no one came to their assistance until Okecheme was swept away by the raging flood while his driver, whose name had yet to be ascertained, was rescued by some boys in the area.

Two young girls who claimed to be Okecheme’s children were seen weeping uncontrollably at the scene of the incident.

The car which was filled with mud water was, however, pulled out by some people, who were angry over the alleged failure of the FCT Emergency Management Agency officials to rescue the victims in time.