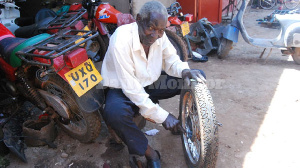 What started as a part-time activity on the veranda of his father’s shop in 1957, became the livelihood for an 80-year-old motorcycle mechanic in Uganda’s Jinja City.

Mr Elias Lwanga left his ancestral home in Katende Village, Mawokota Sub-county in Mpigi District in 1965 and has since settled in Jinja and made a living repairing motorcycles.

Despite his skill, the octogenarian did not go past Primary Seven, which he sat at Aggrey Memorial School, Kitebi.

“I rode a bicycle for around 18 miles from home (Katende) to school (Kitebi) and by 1957 when I sat for my Primary Seven examinations, I had had enough,” he said.

By 1960, Lwanga was full-time into repairing motorcycles at the Makerere-Bombo Road roundabout in Kampala.

Lwanga moved to Jinja after his talent for motorcycle repair was spoted by Indians who brought the Vespa motorcycles to him for repair.

“They first took me on at their dealership at City Scooter and later Car and General, before relocating to Jinja in 1965,” Lwanga said.

He added: “In Jinja, we set up on Iganga Road, and then operated at Jinja Garage, which was later turned into a residential area for Indians. When they (Indians) were expelled by President Idi Amin in 1972, I became self-employed.”

To understand Lwanga’s vast knowledge of motorbikes, he claims to have repaired motorcycles, most of which have since been remodelled or are no longer on the market, including Maneca, Vespa, Newton, Triumph, Ariel, Mercury and BSA.

Workshop
A visit to his workplace on Spire Road in Jinja City on Monday found the father of seven working on a Vespa, which he said had been delivered from Buvuma Island specifically for him to repair.

As he worked, 10 other motorcycles were packed under a shed, all reportedly brought from as far as Soroti and Mbale districts, among other destinations in the far eastern part of the country.

When President Museveni shut down the country to combat the spread of Covid-19, boda bodas were allowed to work, albeit to only carry goods.

Like any other business, Lwanga had to shut down his garage because of the government directives.
If he was not repairing motorcycles, Lwanga says he would be farming.

“I had a piece of land on which I was growing cabbage and tomatoes but it was taken by the municipality,” he said.
He said on average, he makes about Shs20, 000 per day from repairing motorcycles.

Throughout his more than 60-year career, Lwanga says he has built a small house in Danida, educated all his seven children, who are spread across various professions, and groomed 20 young mechanics, with 10 being in either Jinja or Kampala districts.

Mr Jackson Kapere, 42, one of the mechanics who has benefitted from Lwanga’s mentorship, said he met Lwanga in 2001 after finishing a course in motorcycle repairing.

“I used to see him riding around Jinja Town on a Vesper and was told he was a motorcycle mechanic who specialises in repairing Indian motorbikes,” Mr Kapere said

He added: “I was already a mechanic who was repairing Japanese motorcycles, but approached him to gain skills in repairing Vespas (Indian motorcycles) and he took me on for six months.”

Lwanga rides a Vesper Raleigh 1960 model, which he has owned since 1960 and is not about to sell it, despite reportedly receiving several offers.

Taban Lwanga, 45, his fourth born, who resides in Mafubira, Jinja South West City Division, said with the exception of the first born, all of his siblings were born, raised and studied in Jinja.

“My father came to Jinja around 1965, way before I was born yet I am 45 years old and the fourth born, while the last born is 27 years,” Lwanga Jr, also a father of seven, said.

He added: “From what I was told while growing up, he was brought by Indians to repair Vespas, motorcycles which were common amongst them.”

According to Lwanga Jr, his father has at least 40 grandchildren and three great grandchildren, adding that five of his siblings reside in Jinja, one sister is married in Namutumba District, while one elder brother serves in the Uganda People’s Defence Forces.

Moses Bwire, who has known Lwanga for 10 years, described him as a ‘resourceful’ person with a wealth of knowledge.

“His knowledge of motorcycles is unrivalled and for that reason, many motorcycle owners come to him for advice or spares that they have failed to get,” he said.

Mr Jackson Balinde, who has known Lwanga for 15 years, described him as a ‘calm’ man who is ‘very good’ at repairing mainly Vespa.
“Even if a Vespa has been parked for 10 years, he is in position to repair it,” he said.

Gerald Samaya, who works at Spire Road, says Lwanga’s 60-year experience in repairing motorcycles, especially Vespa, has put him ahead of the youthful chasing pack.

“Due to my advanced age, some clients think I am too frail to work or pull off a perfect job. Often, preference will be given to youthful-looking mechanics, some of whom later refer the same clients back to me.

He added: ”Duplicate spare parts have infiltrated the market and the unsuspecting public is being duped.”

For now, Lwanga seems to have fully embraced life as a motorcycle mechanic and has no retirement plans, just yet. Except for an elderly gait that has impeded his movement, Lwanga easily passes as one with a clean bill of health.

“My vision and hearing is good. I do not wear spectacles even when I am reading newspapers. I, however, have some recurring stomach pain which I think are ulcers,” he said.

Lwanga, who was not wearing a facemask throughout the interview, conceded that Covid-19 “is there” and “is real”, but hastened to add that he does not wear a mask when he is working, but wears one “later.”