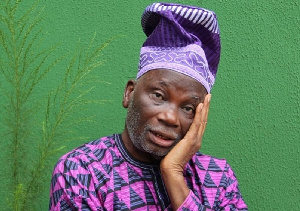 Michael Taiwo Akinkunmi was a 23-year-old engineering student at Norwood Technical College in London when he came across a newspaper advert asking people to enter a competition to design the Nigerian flag. He submitted his design to Lagos via mail after a short time.

In October 1959, he received a letter inviting him to the London office of the Commissioner for Nigeria in the United Kingdom. There, he learned that his green and white design had been selected. Akinkunmi had won 100 pounds, which was $281 at the time. He had also entered his country’s history books.

The design of the Ibadan-born student was officially used on October 1, 1960, Nigeria’s Independence Day. Akinkunmi was never heard of again until 2006 when Sunday Olawale Olaniran, an undergraduate at the University of Ibadan, learned of him. Olaniran was at the time compiling a pamphlet on Nigeria’s history. In the process, he got to know who the designer of the Nigerian flag was and decided to look for him.

“People said he was dead, that I should forget about looking for him and just write about the flag,” he told Aljazeera. Olaniran did not give up in his search. He later found Akinkunmi in Ibadan, who was living alone and being taken care of by neighbors.

“When I met him in 2006, he would never say anything negative,” Olaniran recounted. “He would say ‘God bless Nigeria,’ or ‘Nigeria is moving forward and will keep moving forward.’ Even when you could see around him that he was not well taken care of.”

Olaniran, who felt sorry about the plight of Akinkunmi, contacted a journalist who was shocked to know that the designer of the Nigerian flag was still alive. Olaniran and the journalist went back to Akinkunmi’s home two days before Independence Day. After the visit, a story was published in the national The Sun newspaper on October 1, 2006.

That story introduced Akinkunmi to many Nigerians who had never heard of him. Some donated food, clothes, and other items to Akinkunmi, a pensioner whose pension payments were not regular and hence struggled to survive. Two years after his story was published, a representative of the Nigerian edition of Who Wants to be a Millionaire got in touch with Olaniran and asked for Akinkunmi’s contact. The retired civil servant appeared on a special edition of the show, where he was given a cheque for two million Naira ($4,000 today).

Akinkunmi would use that money to complete a building he now lives in. Following his appearance on the show, Olaniran and others began writing to the Nigerian government about Akinkunmi. The then minister of information, Dora Akunyili, got hold of the story and went to Ibadan to meet Akinkunmi. In October 2010, during Nigeria’s golden jubilee celebrations, Akinkunmi received a presidential award for being a distinguished Nigerian. That was the first time the federal government had publicly honored him, according to Aljazeera.

In 2014, it was reported that he had received a national honor from then-president Goodluck Jonathan. He was also given a lifetime’s salary as a presidential special assistant. Nigerian media reported that around 800,000 Naira will be paid into his account every month.

Akinkunmi does not remember much about his life and the various events that were held to honor him, but he does remember the love and support he got from Nigerians after returning from the UK with his degree in 1964.

“I was well-known all over the place,” he said. “Everybody was calling me Mr. Flag Man.”

Today, his role in shaping Nigerian identity is being more widely recognized. In May, Nigeria’s President Muhammadu Buhari celebrated Akinkunmi on the latter’s 85th birthday. In a statement, the president noted that the octogenarian “upholds the values that every citizen should emulate for nation-building, which include humility, selflessness, integrity and a keen interest in seeking greater good for country and humanity.”

Aliko Dangote sees net worth rise US$571m in one day after 6.53% surge in Dangote Cement