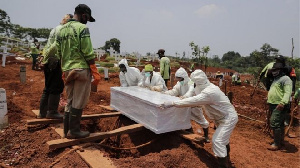 It has made the calculation based on a formula that looks at recorded deaths and case fatality rates.

So far only eight million Covid cases have been recorded but the WHO now estimates that the real figure is 59 million.

In the main, the only people who are tested are those who turn up at health centres with symptoms and those intending to travel out of the country. This means that a huge number of asymptomatic cases are not being spotted resulting in more transmission.

To deal with this, the WHO is boosting community screening in eight countries aiming to reach seven million people with rapid testing in the next year.

Burundi, Ivory Coast, the Democratic Republic of the Congo, Guinea Bissau, Mozambique, Congo-Brazzaville, Senegal and Zambia will be taking part

There has been a decline in recorded new cases recently, the WHO says, but there is concern that with low vaccination rates Covid remains a threat for many.

Kenyan woman arrested after mistakenly spiking her own drink