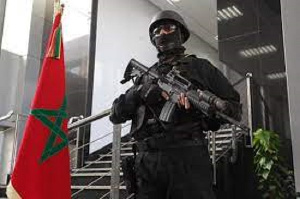 The operation was carried out by special forces in Morocco

Moroccan authorities today, Wednesday, October 6 dismantled in Tangier a jihadist cell loyal to the Islamic State terrorist group, made up of five young men who planned to attack police facilities or shops frequented by foreigners, the Moroccan anti-terrorism agency announced.

In a statement, the Central Judicial Investigation Office said that the operation was carried out by special forces and that members of the cell, aged between 22 and 28, were detained, according to Spanish news agency EFE.

One of the detainees, who the Moroccan anti-terrorism agency claims to be the “emir” of the cell, violently resisted elements of the special forces.

Moroccan authorities declared that the detainees had a terrorist project with “transnational extensions.”

In searching the group leader’s house, the agents found vials and bottles of various sizes containing nitric acid and suspicious chemical liquids, as well as nails, electrical cables, and six small gas bottles, the material used in the manufacture of homemade explosive devices.

Agents seized a large sword and information and support equipment, as well as publications and photographs of the founder of the ISIS branch in the Sahel, Adnan Abu Walid al-Sahrawi, who was killed in August of this year in Mali in a French airstrike.

According to preliminary information from the investigation, in addition to preparing for the manufacture of devices, the suspects were carrying out recruitment and fundraising work for their terrorist actions.

In particular, they intended to remotely detonate bombs in places such as police headquarters and against Moroccan security personnel, as well as in stores with Moroccan and foreign customers, officials said.

One of its members was trained to manufacture explosive devices, using his previous training as an electrical technician.

Authorities said the cell leader had established contacts with ISIS leaders in the Sahel regions and south of the Sahara desert to obtain financial resources and secure the possible supply of weapons and other logistical equipment needed for terrorist operations.

The detainees are now under judicial investigation and authorities intend to deepen the cell’s possible international links and identify its plans, according to the North African country’s anti-terrorism body.

Source: angop.ao
Related Topics:
Up Next

Stay away from Guinea – ECOWAS told