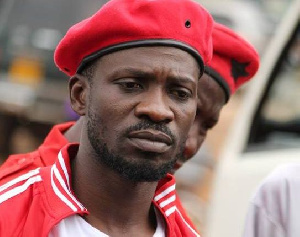 As vote-counting for the 2021 General Elections is still ongoing at the National Tally Centre in Kyambogo, Mr Robert Kyagulanyi, alias Bobi Wine, the National Unity Platform (NUP) presidential candidate has claimed that the government blocked his phones and he could not communicate with people.

“Like my wife’s, my phone has been blocked and I am unable to receive or make regular calls. I know this is to stop me from communicating to our agents and coordinators. I encourage you, comrades, to be vigilant as I try to devise ways of reaching out to you,” a tweet on his official Twitter handle stated. The tweet was posted at 6.30 pm on Thursday evening.

Later, on Friday morning at 12.15 am Kyagulanyi tweeted: “Hello Uganda! Despite the widespread fraud and violence experienced across the country earlier today, the picture still looks good. Thank you Uganda for turning up and voting in record numbers. The challenge now is for Mr. Byabakama and the EC to declare the will of the people.”

However, in response to Kyagulanyi’s earlier claims that the results would be rigged, the Electoral Commission chairman Simon Byabakama, said at a press conference after announcing the third set of provisional results, that Kyagulanyi as the accuser bears the burden of showing proof of the rigging.

On Wednesday evening, the country experienced an Internet shutdown when all access to internet was blocked by the government. Days before that, access to social media platforms had been blocked but many people had managed to bypass that by using proxy websites, Virtual Private Numbers (VPNs) and WiFi in some places.

Most presidential candidates decried the blockage of the internet saying it was limiting their rights to communicate with their agents countrywide, as well as citizens’ freedom of expression.

However, there has not been any known complaint of people unable to make phone calls or send SMSes.

Meanwhile, according to the third set of preliminary results released by the EC on Friday morning at 11 am, the incumbent Yoweri Museveni continues to maintain his lead.