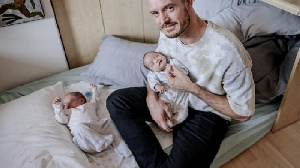 Namibian gay rights advocates are celebrating the decision of a High Court to grant citizenship to a two-year-old son born to a gay couple.

The boy was born through surrogacy to the couple in neighbouring South Africa but the Namibian government refused to issue the boy travel documents.

The government was demanding that the parent seeking to enter Namibia with the child produces a paternity test, a decision the court overruled in its ruling.

The Namibian parent Philip Lühl celebrated the ruling as “a step in the right direction.”

He has twin daughters with his Mexican husband Guillermo Delgado, the girls were also born in South Africa via surrogacy.

The girls were eaelier this year refused entry to Namibia when their parent wanted to return from South Africa.

The couple’s lawyer Uno Katjipuka-Sibolile is upbeat that with the current ruling, the girls can also get necessary travel documents and enter Namibia.

Namibian laws outlaw same-sex relations whereas in South Africa, they are upheld.