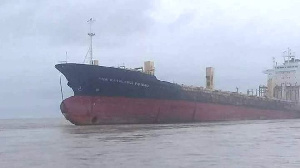 • The Gang men gained access to the vessel and sorted the expatriate crew from the Ghanaian counterparts, where they took the former in their skiffs

A five-member crew of a Ghanaian flagged fishing vessel has been abducted by some suspected Nigeria gangs at sea. The Motor Vessel (MV) Atlantic Princess was said to have been abducted 70 nautical miles south of Tema in the early hours of last Thursday, May 20, 2021.

According to reliable sources, there has not been any indication to the Ghana Navy, Security agencies or the company, African Star, as to the whereabouts of the captives in the centre of the subject matter.

Information gathered from maritime and naval sources noted that MV Atlantic Princess, owned by African Star, was on a fishing expedition in the Gulf of Guinea on Wednesday, May 19, 2021, off the coast of Tema and spotted an old oil tanker, which came to anchor nearby.

It is common knowledge by seafarers that pirates operate under the guise of a mother ship, which carries smaller high speeding crafts that are deployed to attack targets by surprise.

However, the MV Atlantic Princess crew failed to post the lookout for personnel when they were heading to sea.

Reports say the armed gang got access to the vessel, sorted the expatriate crew from the Ghanaian counterparts, took the former in their skiffs and at top speed, chartered course eastwards on the open sea.

Meanwhile, the armed gangsters disconnected all the communication systems onboard the orphaned vessel.

Source: www.ghanaweb.com
Related Topics:GHANANigerseavessel
Up Next