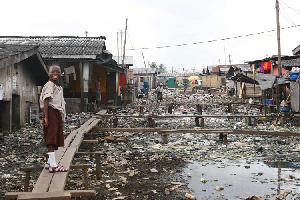 Nigeria has maintained its position as the poverty capital of the world with 93.9 million of Africa’s most populous country currently living below the poverty line, analysts at Financial Derivatives Company (FDC) Limited, have stated.

The research and financial advisory firm stated this in its latest LBS Executive Breakfast Session for September, obtained by THISDAY, with the titled, “Re: Growth Spikes (5.01 per cent), But People are Hungry?”

Nigeria, with its 200 million plus population, was first declared world’s poverty capital in 2018 in a report by the Brookings Institution, knocking off India from the position.

The report had said then that the number of Nigerians in extreme poverty increases by six people every minute.

“At the end of May 2018, our trajectories suggest that Nigeria had about 87 million people in extreme poverty, compared with India’s 73 million. What is more, extreme poverty in Nigeria is growing by six people every minute, while poverty in India continues to fall, “the Brookings Institution’s report had stated in 2018.

Meanwhile, FDC has said that the Petroleum Industry Act (PIA), which is in the process of being implemented will have minimal impact on new investments in the downstream sector of the Nigerian oil and gas industry.

The company based its projection on the fact that petrol subsidy was still in existence despite the deregulation of the downstream sector by the PIA coupled with investors’ ongoing transition towards investments in renewable and clean energy.

“Implementation of the PIA to continue but subsidies will remain. Minimal impact on new investments in the downstream sector as investors’ transition towards investments in renewable and clean energy, ”the company said.

Although, deregulation of the downstream petroleum sector is among the provisions in the PIA, the federal government has ruled out immediate removal of petrol subsidy pending when an alternative to petrol is made available.

In its fiscal policy outlook, the financial advisory firm stated that public finance deficit would remain in its N5.6 trillion for 2021, adding that oil revenue would be insufficient to meet the country’s expenditure needs.

Predicting that tax revenue would be undermined by widespread evasion and a large informal sector, FDC analysts said that federal government’s debt burden would intensify as ways and means advances climbed.

Ahead of the next Monetary Policy Committee (MPC) meeting of the Central Bank of Nigeria (CBN) slated for September 20 and 21, 2021, the company said the committee would likely bring down Monetary Policy Rate (MPR) commonly known as interest rate by 0.5 per cent to 11 per cent.

This, the economic think tanks said, would be supported by sustained positive growth rate (5.01 per cent) and continued moderation in inflation rate (16.8 per cent in August), while other interest rates would remain constant.

FDC further forecasted intensified efforts toward convergence of the exchange rates and the reduction of the parallel market premium.

It however pointed out some positive developments that should make Nigerians cheer, including the fact that the value of transactions across e-payment channels increased by 46.24 per cent in the second quarter (Q2) of 21 to N72.39 trillion from N49.5 trillion recorded in Q2’20.

Others included the declining of the velocity of circulation by 2.33 per cent to 4.62x; the climbing of the Federal Allocation (FAAC) disbursements by 3.76 per cent to N760.7 billion from N733.1 billion in July.

Others are vessels awaiting berth sharply down by 68.75 per cent to five in Lagos ports from 16 in July; as well as the signing of the PIB into law.

Other positive developments, according to the report, were, that Nigeria would receive the International Monetary Fund (IMF)’s SDR of $3.35 billion, which will provide a 10 per cent cushion to external reserves.

Also included as part of the positives was the increasing of dollar supply to commercial banks by 200 per cent by the CBN.

However, on the negative side, FDC listed some developments that should worry Nigerians, including the falling of total capital importation to $875.62 million in Q2’21, from $1.91billion in Q1’21, and the crashing of the parallel market rate to N526/$ on Foreign Exchange (FX) supply shortages.

It equally cited the stopping of the forex sales to Bureau De Change operators (BDCs) and the barring of microfinance banks from forex transactions by the apex bank, as another issue that should be of concern to Nigerians.

On inflation, the company said, “While we expect inflation for August to fall again to 16.8 per cent, the impact of insecurity, exchange rate pass through and higher energy costs could exacerbate inflationary pressures.