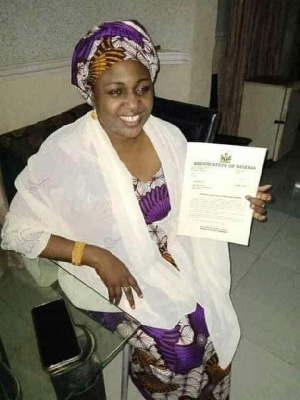 There was public derision after an appointment letter confirming Balaraba Ibrahim as “Special Assistant to the governor on Women Affairs (Unmarried)”, surfaced on social media.

Government officials in the north-east state have told the BBC that that was a typing error and that she was in fact appointed as “Special Assistant on Women Affairs (Divorced)”.

In her new role, Ms Ibrahim, a divorcee herself, is expected to organise state sponsored mass-weddings for divorced women and also support their business ideas.

And it’s not a responsibility she is new to, Ms Ibrahim has been head of the association of divorced women in Bauchi state where she has organised meetings and programmes for them.

The governor’s spokesman, Mukhtar Gidado, told the BBC that the appointment was copied from neighbouring Kano state where there is a similar role.

“The idea is for the government to assist them in arranging marriages,” he said.

Divorce rates are high in northern Nigeria, where a husband only has to write “I divorce you”, three times on paper to end a marriage, says the BBC Pidgin’s Mansur Abubakar in Kano.

Observers wait to see if the Bauchi state governor also follows the example of his colleague in Kano by appointing aides for graveyard and streetlight matters.

In 2017 a governor in the eastern state of Imo created the ministry of happiness and purpose fulfilment and appointed his sister to the role.