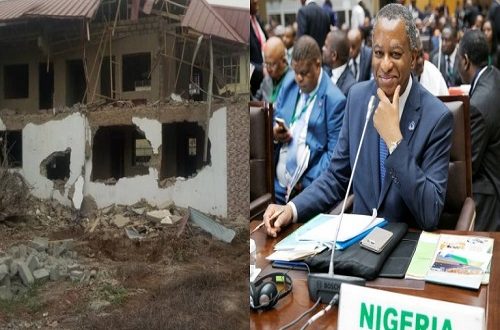 Nigeria has rejected Ghana’s formal apology over a demolition exercise undertaken under at its High Commission here in Accra, describing it as a “direct attack on the Federal Republic of Nigeria which must not go unanswered”, mynewsgh.com reports. Nigerians lawmakers are therefore urged the Foreign Ministry to institute a direct retaliation on the Ghana Mission in Abuja to send a strong warning to Ghana.

This came to light when Nigeria’s Minister of Foreign Affairs, Geoffrey Onyeama told Nigeria’s House of Representatives that Ghana has apologized to Nigeria for the “wrongful” demolition of buildings of the Nigerian Embassy in Accra. The minister told the lawmakers that the action was undertaken by non-state actors.

Mr. Onyeama also said the Government of Ghana is very remorseful and had apologized profusely for the invasion. President Akufo-Addo even phoned Nigeria’s Buhari to apologize.

The lawmakers said an apology is not enough.

Speaker of Nigeria’s House of Representatives, Mr. Femi Gbajabiamila dismissed the apology the minister said had been tendered to Nigeria by Ghana. He stated that Nigeria must reciprocate the attack on its sovereignty by Ghana because the demolition is an attack on Nigeria as a country.

According to reports by Punch Nigeria’s Leke Baiyewu in  Abuja, the Lawmakers asked the Minister if it were the United States’ embassy that was demolished in Ghana, “do we think the US would be talking about an apology or ‘we will look into it’?”

They said the US and the United Kingdom would not have taken it lightly with Nigeria if their embassies tampered within Nigeria. They also said the time it took for the Ghanaian authorities to respond to distress calls made by officials at the embassy “is extremely troubling.”k

The speaker of the House said, “We all have the responsibility to make sure that we uphold, very simply, the honor and glory of the country we serve.

“In terms of immunity and inviolability, in terms of diplomacy, it also extends to property. We are not just talking about the states. It is trite that the embassy of any country is actually the state – a sovereign location in that, particularly foreign country. That is why if there is any problem in Nigeria today, all the Americans will run to the American Embassies to seek shelter because you cannot even move near there.

“So, from that point of view, we need to address this in that context that Nigeria was attacked. I’m not interested in the land dispute, it is not an ordinary land dispute. It is not! It has now metamorphosed into a dispute between two countries, not by landowners.”