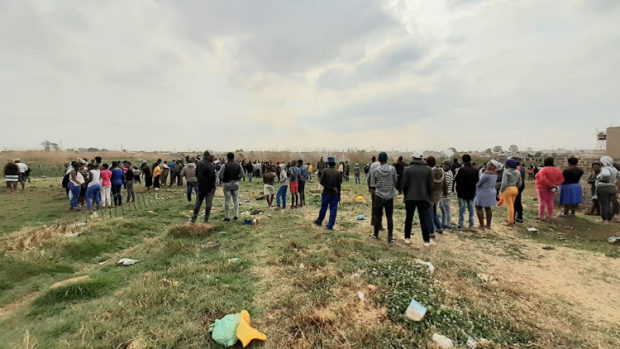 Residents launched a manhunt to find a man they believed had been spotted with a child reported missing from a school in Orange Farm, south of Johannesburg, on Tuesday.

The child went missing from Madume Primary School at around noon.

Community members surrounded a wetland where they believed the man was hiding.

Several men were searching the reeds with machetes and axes.

The reeds were being set alight in a bid to drive the man from his hiding place.

But when police arrived, they said the child had not been abducted but was merely missing. The situation became volatile as the search continued and stones were hurled.

Reports at the scene indicate that the child has subsequently been found, was safe and had been reunited with its mother.

Residents in the area are on edge after the bodies of two children, aged six and eight, were discovered in the area at the weekend.

SowetanLIVE reported that they were smudged with a black substance on their mouths and underneath their feet. A note was found on one of the bodies.

This is a developing story.

Related Topics:orange farm
Up Next

Sergeant told me to shoot to scare him off: Constable in Nateniël Julies case