Home / AFRICA / PHOTOS: Hero dog that took bullet to protect family is on the mend 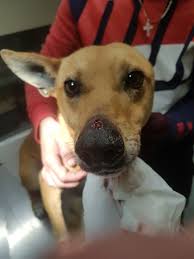 PHOTOS: Hero dog that took bullet to protect family is on the mend

A dog that took a bullet to protect his family from would-be hijackers is on the mend – and his owner can’t wait to have his hero back home.

Guluva was shot in the face earlier this month by three criminals who had set their sights on a Mitchells Plain home.

Derrick Mfengwana told News24 that his dog saved the life of his sister’s boyfriend, who was approached after parking his VW Golf 5 outside their shared property on the evening of July 17.

“As he was trying to open the gate, someone had a gun behind him and was saying give me the car keys,” he said.

“The dog was inside the yard and went for one of the men, which is when they shot him in the nose.”

Guluva’s intervention allowed the boyfriend to run to safety. The criminals ran away empty-handed.

“I was watching a movie inside and heard the gunshot. I heard my girlfriend and sister screaming and thought they had shot her boyfriend because I saw blood around the house,” Mfengwana recalled.

“When we went outside, I saw my dog was bleeding. He was still standing and running around.”

Guluva when he was first admitted to the Animal Welfare Society of SA. (Supplied)

Mfengwana wrapped the four-year-old dog in a towel and rushed him to the Animal Welfare Society of South Africa (AWS) in Philippi.

AWS spokesperson Allan Perrins said Guluva was the fourth gunshot animal victim they had seen in the last two weeks. Two other dogs and a cat were admitted with facial or upper body wounds as a result of bullets.

He said the bullet damaged Guluva’s jaw and tongue. The brave dog was eating and responding well to treatment, although there was always a risk of secondary complications.

Vets would continue to keep an eye on Guluva for another 21 days, before releasing him into the care of his family.

“We have spent between R2 000 and R5 000 on his recovery and the owner is unlikely to afford a co-contribution. We appeal to the public to please help us,” said Perrins.

Mfengwana said he visited his furry friend at AWS and had already diarised his homecoming next month.

“These criminals have done a lot of damage and we feel unsafe,” he said, adding that he hoped the police would arrest those responsible soon.

No one has yet been arrested.

A recovering Guluva with the AWS veterinary team on Friday. (Supplied)