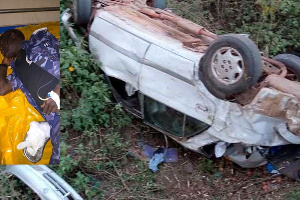 A police officer attached to Field Force Unity in Lira has died while four of his colleagues are fighting for their lives in hospital after the car they were travelling in overturned in Kapchorwa District.

He died on the spot when the car they were travelling in overturned after skidding off the road at Thepkwatit village in Kawowo Sub County along Kapchorwa-Bulambuli highway.

“The accident happened when a saloon car registration number not known being driven by a yet to be identified person lost control and overturned several times, killing one officer on spot,” Mr Chesang said.

The body was taken to Mbale City Mortuary for postmortem as investigations continue while the injured officers were taken to Mbale regional referral hospital for medication.

Mr Chesang told Daily Monitor that the officers were from attending a burial ceremony of one of their colleagues, L/AIP Brian Cheptotik, who also died in an accident in Yumbe District.

“That accident happened when they were going back after the burial of their colleague, L/AIP Brian Cheptotik, a police officer attached to Yumbe Central Police station, “he said.

Cheptotik was buried on Friday in Katchesombe Ward in Kapchorwa Municipality.