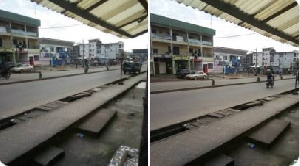 Campaign group Human Rights Watch has accused the Cameroonian government of using the coronavirus pandemic as an excuse to “quell the right to assemble” ahead of protests planned for Tuesday.

The opposition MRC/CRM party, whose leader Maurice Kamto maintains he was the rightful winner of the 2018 presidential election, is calling for institutional reforms and the return of peace to the country’s troubled Anglophone regions.

But on Friday, days ahead of the planned demonstrations, security officers forcibly searched vehicles at busy road junctions in the capital Yaoundé.

The health minister also called for a “ban” on “all protests” in favour of social distancing and other “live-saving measures”.

The next day, HRW says, the headquarters of the opposition CPP party were surrounded by over 30 policemen and gendarmes who left after an hour’s stand-off.

Despite the call to protest, residents of the two biggest cities, Douala and Yaoundé, say many people are staying at home.

A heavy security and police presence is reported.

Kenya to get Coronavirus vaccine from 2021