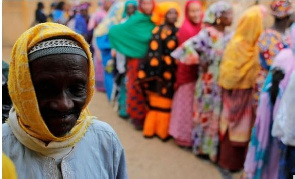 Senegal presidential election gets under way

Senegalese voters have begun casting their ballots in the country’s presidential election.

President Macky Sall is seeking a second term and faces four challengers in his bid.

Since coming into office, Mr Sall has focused on new infrastructure projects, but critics say he has done little to improve the lives of ordinary Senegalese.

He is also accused of preventing political rivals from running.

Last month, two well-known opposition figures were barred from contesting the election because of past corruption convictions.

Khalifa Sall, the popular former mayor of Dakar, and Karim Wade, the son of the former president, were deemed ineligible to run because of corruption convictions.

As a result of the decision, neither the Socialist Party nor the Senegalese Democratic Party, which have dominated the country’s political landscape since independence, are fielding presidential candidates.

A law was also passed in 2018 requiring candidates to have a certain number of signatures from voters to be able to run.

As a result, only five candidates have been deemed eligible for Sunday’s vote, compared to 12 in the last election.

Mr Sall has portrayed himself as a moderniser who has helped to boost economic growth to more than 6% a year, one of the highest rates in Africa.

More than 6.6 million people are registered to vote in these elections, and who young people decide to support could have a significant impact, as the average age in the country is 19.

With two peaceful transitions of power through elections and no coup since its independence in 1960, Senegal is one of the most stable countries in Africa.

Preliminary results are expected soon after polling closes at 18:00 local time (18:00 GMT), but will only become official a day or two later, the AFP news agency reports.

If no candidate wins a clear majority, the country will go to a second round of voting in March.