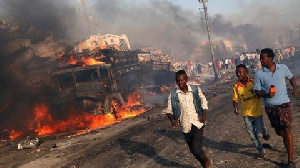 An explosion in Somalia has killed at least four people including a regional governor.

Correspondents say the bomb blast in Galkayo is widely thought to have been detonated by Islamist militant group al-Shabab, which is very active in the area.

In recent years it has killed numerous officials including senior members of the police force, a mayor and business leaders.

Galkayo is a divided city that is governed by the two states of Galmudug and Puntland.

Militias from rival clans have often fought each other in the city.