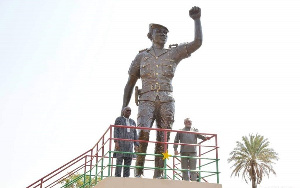 Nearly three-and-half decades since his assassination, the trial of Burkina Faso’s former President Thomas Sankara will start in the West African country today.

Fourteen men including his close friend and exiled former President Blaise Compaore have been charged with complicity in the murder of Sankara.

Compaore who remains exiled in Ivory Coast disclosed through his lawyers last week that he was boycotting the trial.

Sankara, widely known as “Africa’s Che Guevara” was killed at the age of 37 by soldiers during the coup of 15 October 1987.

Blaise Compaoré come to power on the back of that coup and remained in office till a popular mass protest forced him out in 2014. The duo had staged a takeover in 1983 which saw Sankara become president.

Sankara remains a revered icon across much of sub-Saharan Africa along with the DR Congo’s Patrice Lumumba. They are seen as promising young leaders who stood up to the West and colonial powers and were killed as a result of their aspirations.

ECOWAS Speaker, others arrive in Ghana for Extraordinary Session