Home / AFRICA / TRENDING VIDEO: United Nation Official Spotted Making out With a Lady in A Car 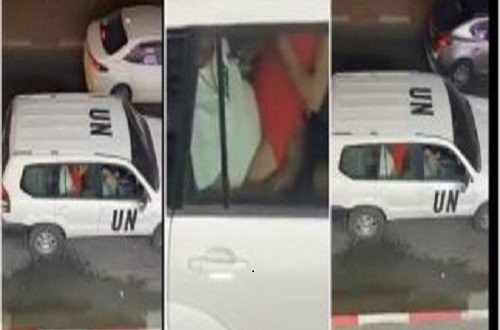 TRENDING VIDEO: United Nation Official Spotted Making out With a Lady in A Car

“Let us declare in one voice: We will not tolerate anyone committing or condoning sexual exploitation and abuse. We will not let anyone cover up these crimes with the UN flag. … Let us make zero tolerance a reality.”— Secretary-General António Guterre

However Social media has been set ablaze after a Twitter user shared footage of United Nation Officials and a lady making out in a Vehicle, According to the Twitter User, the man in the back seat is a UN delegation member and the woman is a hooker that he allegedly picked up off the road to sleep within the vehicle.
Stéphane Dujarric being the Un spokesperson reveal to the New humanitarian that “shocked and deeply disturbed by what is seen on this video“
Although the video is unclear, the number plate of the car appears to belong to UNTSO, which stands for the United Nations Truce Supervision Organisation, a UN body originally formed in May 1948 to monitor a ceasefire around the time of the establishment of the state of Israel.

Dujarric added that the UN’s Office of Internal Oversight (OIOS) is already investigating the alleged incident and that the identification of the individuals in the video is close to being completed. The OIOS is an independent body that probes misconduct, fraud and corruption within the UN.