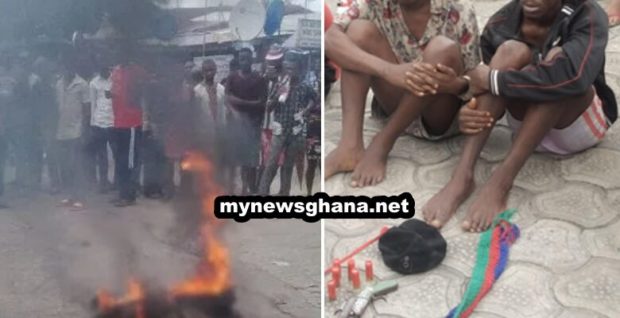 An angry mob in Nigeria’s Calabar of Cross River State has arrested and lynched two teenage armed robbers for robbing a supermarket.

Reports say that the two boys tried to rob a Supermarket named Sunnytex at around 9.00 pm on Monday night but unfortunately failed and were arrested by the people.

Narrating the incident, an eyewitness said,

“When we noticed that the boys were robbing, we decided to lay siege and accost them, we were not afraid because we discovered they had a locally-made gun.

“Immediately they came out from the supermarket the mob went after them, and raised the alarm, funny enough, one of them too joined the mob in shouting “thief ooo” not knowing that he has been marked already.

“Two ran through a nearby street while the one who joined us in raising alarm wanted to escape via Rabana roundabout, he was apprehended and lynched.

“While the other was also lynched and set ablaze,

“The third person is still at large as some people have already gone after him and I believe he will be apprehended too because everyone around at alert as we speak.”

Jacob Zuma is being targeted by judge Zondo, claim his supporters

20-Year-Old Poly Student Killed By Her Boyfriend For Ritual