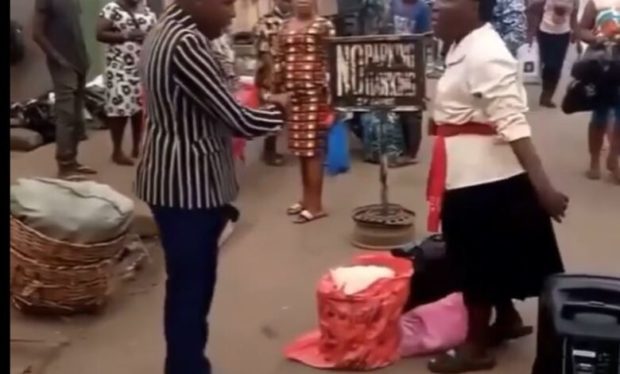 Two supposed men of God who had mounted their stands to convert souls for Christ ended up making a mockery of themselves as they openly clashed over space.

Both street preachers were scene laying claim to a particular spot which happens to be the busiest within the Central Business District for their evangelism.

In the raging confusion, one was heard referring to the other as an Ashawo Pastor among other unprintable adjectives used in describing him hawkers looked on in disbelief wondering if the two were indeed on the streets to preach the gospel.

In a video sighted by MyNewsGhana.net which has since gone viral, the female preacher came to meet her male colleague who was already blasting into a mounted public address system urging residents to give their lives to Christ.

She angrily asked him to move away from her space because that was the spot meant for her. When the male preacher resisted, he started hurling insults while onlookers watched in disbelief.

It is not immediately known where this took place, but sources revealed it happened on one of the states in Nigeria.