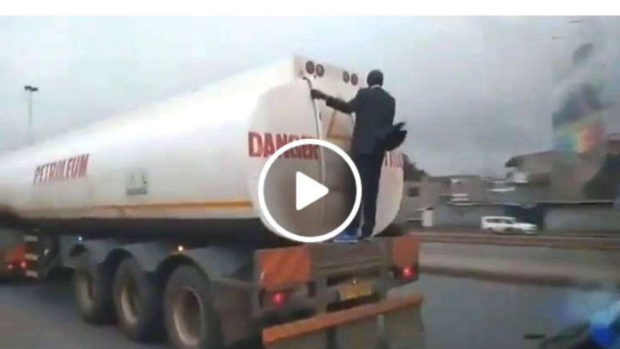 A Nigerian man sparked reactions on social media after he was spotted enjoying a free ride to work behind a petrol tanker in a new disturbing video that emerged on social media.

In the video that has caused an uproar on social media, the man can be seen hanging behind the petrol tanker, hanging comfortably like there isn’t any danger involved in his actions, completely disregarding the danger signal on the tanker as well.

Mixed reactions have followed the video, with some finding it funny while others made a joke out of it but majority condemned the act.

However, it is worthy to note that a small percentage of people said a prayer for the man and asked God to provide him with a car soon.

Video Player
Related Topics:man
Up Next