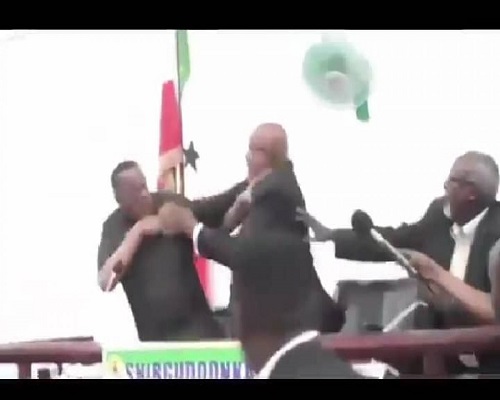 As we are congratulating Joe Mettle and his wife, Salomey Selssie Dzisa; it was all drama between Somali President and his Vice as they exchange blows.

In a rather unpopular turn of events, Somalia president, Mohamed Abdullahi Farmaajo and his vice Hussein Kulmiye Afrah exchanged ‘James Bond’ kind of blows to the point of wrestling to the ground. They were sited next and close to each other in what seemed like a press briefing.

They were holding hands as if there was something that both of them wanted to have, before they stood up blowing each other blue and black. It took efforts of a handful of men to separate the two who were busy tearing each other apart.

This is a very rare occurrence to happen anywhere in the world. It is not only embarrassing but also a very bad example from the people who should be preaching peace and acting as good role models to the entire country.

They fought in public and in front of the cameras. The act can fuel dangerous divisions between the supporters of the president and those of his vice. They should put their pride aside and apologize to their citizens to ensure that the country remain united.