• The incident took place in Durban, South Africa and its video has since gone viral

The South African mother who was forced toss her child to strangers from a burning building last Tuesday has spoken to the BBC.

According to her, it was a hard decision and an easy one at once – hard because she feared what will happen if the little girl fell to the ground but also easy because she wanted the child out of the building by any means possible.

In an interview with the BBC, she said: “I looked down and I thought, no I can do this. I can do this, in order for her to be out, I can try it. I looked down, I was scared, I was really really scared but there were people down in the street.

“The way I was panicking, I was trusting anyone to take my baby away from me, because the place was burning and she was crying and so the lady told me that ‘she is crying,’ I said no. don’t mind her crying, I have to take her out.’”

She revealed that her task was also made easier because of the shouts for her mto let go of the child by the group waiting below the building to clutch her.

“Even for me for being there, I wasn’t scared any more because she was out of the place,” she added.

A viral video of how she had to throw out the child was shot in the city of Durban where riots have led to deaths and destruction of properties.

According to reports, the fire was started by looters who had raised shops and other commercial centers, she was later rescued and reunited with her unhurt child. 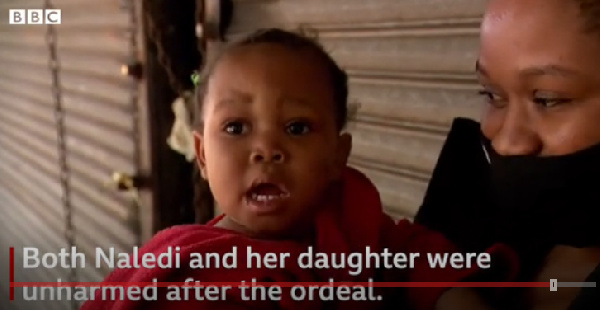 What is happening in South Africa?

There is unrest that has led to mass looting of shops, burning of shopping centers and cars as well as deadly violence in the last few days. Some 72 people have so far been confirmed dead.

The chaos has been triggered by the arrest and trial of former president Jacob Zuma who is currently in prison custody serving a 15-month jail term for contempt.

His home province of KwaZulu Natal was where the violence started from and its epicenter even though it has since spread to Gauteng Province that contains Johannesburg, a key commercial hub.

Source: www.ghanaweb.com
Related Topics:BUILDINGburning
Up Next