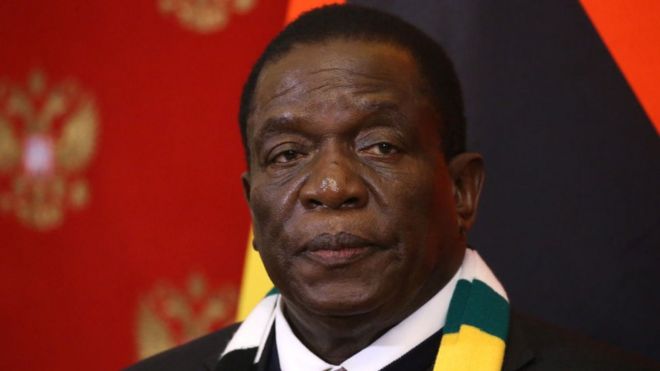 Zimbabwe’s president has vowed to “flush out” his opponents as anger with his government grows over alleged corruption and economic mismanagement.

Attempts by “a few rogue Zimbabweans” to destabilise the country in “league with foreign detractors” would be overcome, Emmerson Mnangagwa added.

More than 20 people have been arrested since last week when an anti-government protest was blocked, lawyers say.

#ZimbabweanLivesMatter has trended on Twitter, with celebrities – including South African rapper Kiernan Forbes, who is popularly known as AKA – supporting the campaign.

Award-winning Zimbabwean author Tsitsi Dangarembga, a nominee for this year’s Booker Prize, was among those detained for taking protest in a protest on Friday in defiance of a police ban.

She was released on bail after being charged with incitement to commit violence and for breaching health regulations introduced to curb the spread of coronavirus.

Journalist Hopewell Chin’ono is still in detention after being arrested and charged last month with inciting public violence.

He had exposed alleged corruption in the health ministry during the purchase of medical supplies to tackle the virus.

His arrest was condemned by the US government and UN officials.

What exactly did the president say?

In a televised address on Tuesday, Mr Mnangagwa condemned the “machinations of destructive, terrorist opposition groupings”.

“Those who promote hate and disharmony will never win. The bad apples that have attempted to divide our people and to weaken our systems will be flushed out. Good shall triumph over evil,” he said.

Mr Mnangagwa added that his government had faced many hurdles since taking office following the ousting of long-time leader Robert Mugabe in 2017, but it would remain resolute.

“We will defeat the attack and stop the bleeding of our economy. We will overcome attempts at the destabilisation of our society,” he said.

Zimbabwe’s economy is in deep crisis, with inflation rising to more than 700%.

Last month, the World Food Programme (WFP) said nearly two-thirds of the population will need food aid by the end of this year.

The WFP said the Covid-19 lockdown has led to massive unemployment and rural hunger as urban migrants are returning to their villages, where there is little to eat.

It was an unexpected early morning address by President Mnangawa, some say damage control prompted by growing global criticism.

The president’s tone was part conciliatory, calling for patriotism, assuring the nation that political and economic goals are on course.

But it was the warnings that raised concerns about repression.

Many have already been arrested for demonstrating against alleged corruption.

And Zimbabwe’s economy has been in a slide. The government blames it on currency manipulation and western sanctions.