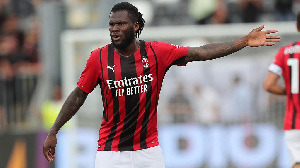 Liverpool are considering a move for AC Milan midfielder Franck Kessie – according to Italian outlet Ansa.

The 25-year-old’s current contract expires in June 2022, and the Reds could look to sign him on a free transfer as they seek a replacement for Georginio Wijnaldum.

However, Liverpool are not the only top European club eyeing Kessie, who has hit five goals in 16 Serie A games for Milan this term.

Mali prospect Eintracht Frankfurt defender Almamy Toure is the subject of interest from Roma – according to Calciomercato.

The Giallorossi are looking at the 25-year-old as an alternative signing in case they fail to land Arsenal’s Ainsley Maitland-Niles in January.

Frankfurt may be willing to let Toure depart if Roma submit an offer within the region of €8 million.

The 18-year-old – who is of Cameroonian descent – has spent time in the academies of Bayern Munich and Stuttgart, and Napoli view him as a prospect for the future.

Kessie’s deal with Milan expires at the end of the season and he is free to sign a pre-contract agreement with another club starting in January.

Sako wants Aubameyang back at Saint-Etienne