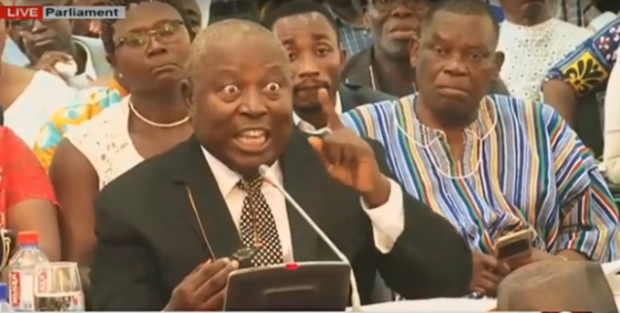 • Martin Amidu has opened up the conversation on Agyapa Royalties Transactions

Martin A. B. K. Amidu, the formal Special Prosecutor has opened another conversation on the Agyapa Royalties Transaction where the Akufo-Addo-led government wants to invest the country’s royalties in a tax haven.

According to him, the analysis on the Agyapa Royalties deal “teaches all Ghanaians that this Government came to power on the strength of the rhetorical abilities of a candidate who had perfected the art of saying one thing and doing exactly the opposite”.

In his latest article copied to GhanaWeb, the former deputy Attorney General and Minister for Justice explained:

“The Office of the Special Prosecutor and the first Special Prosecutor were intended as [a] mere window dressing to Ghanaians and [the] world while the public purse continued to be raped through purposeful corruption activities on the blind side of the voters who brought the President into power.

I was hoodwinked like many other Ghanaians, first to support the Kabuki campaign of candidate Nana Akufo-Addo for President during the 2016 elections and secondly to accept to be the Special Prosecutor (in the teeth of my initial refusal to be nominated for the office of Special Prosecutor) with the assurance of real independence to perform the functions of that Office. I never phantom that the President I trusted and upon whose honour I accepted the office merely wanted to use my known public reputation and integrity to foster suspicious corruption and corruption activities in his government. I wish the next Special Prosecutor good luck during his tenure.”

Amidu further indicated that his article demonstrates what consequences await any appointee of this Government who takes literally as I did, the President’s rhetoric of “be citizens’ and not “spectators”.

“The Agyapa Royalties Transactions anti-corruption analysis and assessment report was done professionally without fear or favour, affection, or ill will. When our political rhetorical President saw that the report implicated him, his family and friends in suspected corruption activities, an official government anti-corruption assessment supported by law became an instrument of political damage control for his government.

The President not only sought to interfere for me to shelve the report from the public, but the President also went further after failing to have my co-operation, to lead and signal his family and friends kabuki dance ensemble to assassinate my character, my reputation and possibly my person as evidenced by the actions and pronouncements of his supporters,” Martin Amidu said.

He argues, ‘“Time is everything”, indeed’ but I am not, as a citizen of Ghana, going to be intimidated by the fear of death or the use of the power of the state at the disposal of any President and his cohorts from continuing to defend the 1992 Constitution as enjoined by the Constitution itself. I refuse to be intimidated by the Nana Akufo-Addo, family, and friends’ Kabuki theatre into a culture of silence if I remain their target for damnation. Fortunately, other suspected corruption activities of this Government such as the procurement of the Sputnik V vaccines and others are currently topical suspected corruption activities.

The apolitical #FixTheCountry movement and the galvanized attempts by the government to suppress the expression of its free will shows how silence through fear can negate the citizen’s rights under our Constitution. Let all of us as patriotic Ghanaians resist at the peril of our comfort and lives the attempt by this government to suppress our rights to defend the 1992 Constitution. That is the only surest way to protect the Constitution and put Ghana First.”

Read below his full article.