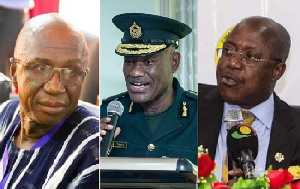 Aisha Huang gate: Akufo-Addo appointees who are ‘under pressure’ to resign

The return into the country of a deported Chinese national notorious for engaging in illegal small-scale mining, galamsey, has dominated new headlines in the last few days.

The fact that Aisha Huang, with her new identity Huang En, reentered the country ‘unnoticed’ till her arrest earlier this month at Ahodwo in Kumasi; has gotten people talking across the political and security spectrum.

One point that has been made forcefully is that heads must by all means roll, for which reason calls have started for some top officers at sensitive state institutions to resign or be fired by President Nana Addo Dankwa Akufo-Addo.

Journalist Manasseh Azure Awuni, took a general stance in his call when he posted a message asking the President to resign or fire some officials.

His September 5 post read: “Akufo-Addo must resign if he can’t fire anyone for this Aisha Huang embarrassment. The sh*t is now beyond the ceiling.”

GhanaWeb tracking shows that some appointees being asked to quit over the matter include, the Interior Minister, heads of the National Identification Authority and the Ghana Immigration Service.

We look at the ‘under pressure’ officers and those making the charge for them to resign and for what reasons.

The Greater Accra Regional Chairman of the National Democratic Congress (NDC), Mr Joseph Ade Coker in an interview on Atinka TV on Tuesday called for the Minister of Interior to resign over the re-entry of Aisha Huang.

Immigration boss must be fired

He said “The immigration service, I think the Comptroller should be fired if he is not thinking already of resigning and I say this on principle.

“It looks as if our security institutions have taken Ghanaians for granted, they must remember that we are in a democracy and they owe the people of Ghana the duty to explain to them circumstances leading to the resurfacing of Aisha into this country.”

In his view, “If [Ghana] was a properly functioning democracy, I think the Ghana Immigration Service should have even held a press conference yesterday, giving Ghanaians details as to how this lady found her way back into the country, after she was arrested, steps they have taken to make sure it doesn’t happen again.”

NIA boss must be fired

Revelations that Huang was a holder of non-citizen Ghana Card also shone the spotlight of the NIA and their role in regularizing the stay of Huang in the country.

“If we are serious, the boss of NIA will be sacked for giving Aisha a Ghana Card. It’s proof that all his noise and acts are a sham!!,” IMANI Africa Vice President Kofi Bentil posted on Facebook.

He followed that post up with an “Edit” that read: “The head of NIA has given some answers. He says Aisha was given a foreigners ID card and the system caught her when she tried to re register with another name. We will check and revert.”

But even before Bentil, an aide to former president John Dramani Mahama, Joyce Bawah-Mogtari had made that call for Prof. Ken Attafuah to quit.

“In a serious country, the National Identification Authority Boss would have been asked to resign or be sacked!!” she tweeted.

Aisha rearrested and due for prosecution

Aisha Huang was recently arrested for engaging in galamsey-related activities. She is reported to have entered the country via the Togo boarder after her deportation.

Aisha Huang has since been remanded by an Accra High Court and is set to reappear with three others on September 14.

The Attorney General’s office has also assured that it will prosecute Aisha Huang for her past and present crimes.

It will be recalled that Aisha Huang gained notoriety as an illegal mining kingpin in 2017. She was arrested for the same conduct but later deported with the state discontinuing the trial against her.

Justifying why the state had to deport the Chinese national, the Senior Minister, Nana Yaw Osafo Maafo, addressing some concerns of Ghanaians in the diaspora at a town hall meeting on April 18, 2019, revealed that, “Putting that woman [Aisha Huang] in jail in Ghana is not going to solve your money problem. It is not going to make you happy or me happy.”

But President Akufo-Addo in 2019 said the deportation of the Chinese galamsey kingpin was a ‘mistake’.