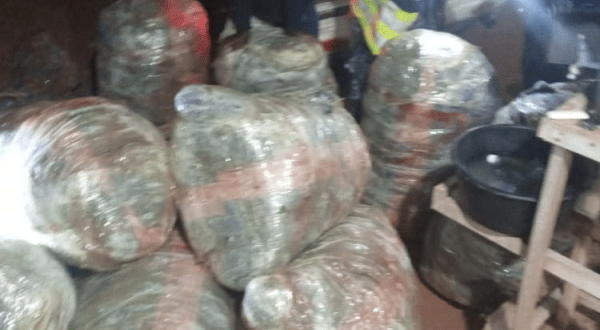 A vehicle carrying large quantities of dried leaves suspected of being weed was seized by police at Akatsi in the Akatsi South Municipality of the Volta region.

At Netikope, near the Dzodze-Tadzewu Barrier in the Ketu North Municipality of the Volta region, the car, a Hyundai commercial mini bus with registration plate AW 3121-Z, was pursued and apprehended.

In an interview with the Ghana News Agency (GNA) monitored by Mynewsghana.net, Chief Police Superintendent Joseph Atsu Dzineku of the Akatsi South Municipal Police Commander, said that the bus was apprehended on Wednesday (13 January) at approximately 0010 hours after acting on intel.

“When my men finally located the bus, the vehicle was heading from Ziope through Akatsi to the Tadzewu area.”

Dzineku further confirmed that the driver, the only bus occupant suspected of having received a police signal, had accelerated and abandoned the fully loaded vehicle at Netikope, near the Dzodze-Tadzew barrier.

In 16 wide compartments of various sizes, the well-compressed dried leaves were concealed.

He suggested that staff from the Police Service’s Narcotic Management Unit in Ho will take full control of the case and open up more inquiries into the matter.

No arrest was carried out while the driver of the vehicle was still at large.

Previous VIDEO&PHOTOS: One dead, two severely injured after accident on Kasoa-Budumburam stretch
Next Pastor Busted By Police For Killing His Own Daughter For Powers