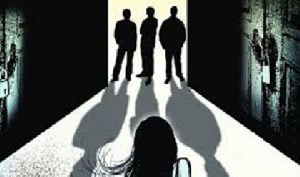 For the second time in almost a week, the Kwame Nkrumah University of Science and Technology (KNUST) has been rocked by allegations of gang rape.

On Sunday July 21, 2022, a police officer, General Lance Corporal Frank Adu-Poku and a final-year student, Joel Osei-Owusu were arrested for allegedly forcing to have sexual relations with a level 100 student.

A similar event happened on Friday, 29 July 2022 where 6 male students were arrested by the police for allegedly gang-raping a first year student of the university.

How the rape happened:

According to a U TV news report, the victim, whose name was withheld, was the girlfriend of one of the accused persons, who invited her to have group sex with some friends through a text message, which she objected to.

The report said that the boyfriend, who was named Patrick Ofosu, a 19-year-old level 200 business administration student, then deceived the victim, telling her that the sexual encounter would be between only the two of them.

While the two were having sex, five other male students who are also in their second year entered the room. Owusu after having sex with the victim, allowed his friends to take turns in raping her while he covered her mouth and held her down.

On Wednesday, August 3, 2022, the suspects were arraigned before the Asokore Mampong District Court.
Aside from Patrick Fosu, the other accused persons are Edwin Nii Noi Quaynor, John Wilson, Kingsley Asiedu Andoh, Thompson Nii, and Assafua Eric.

During the hearing, the state prosecutor in charge of the case, ACP Kofi Blagodzi, said that his team will continue with their investigations ahead of the next sitting.

The defence lawyer also disclosed that he will apply to a higher court to seek bail for his clients, among other things to allow them to write their examinations.

“At this material moment this is a court of the first instance, and they have been brought here for purposes of remanding them in lawful custody.

“So, we are also going to take steps and go to the appropriate forum and then apply for bail for them, then they can continue with their examinations and face trial while the matter is pending before the court.”
Meanwhile all 6 suspects have been remanded into police custody and are to appear before the court on August 18, 2022.

What KNUST has said about the incident:

The university, according to reports, has confirmed that it is aware of the said incident.

The University Relations Officer of KNUST, Dr. Daniel Norris Bekoe, has said that the authorities of the university have received a report of the issue but he refrained from giving further details.

What the lawyer of the accused persons has said:

In an interview after the sitting, the lawyer for the six students, stressed the innocence of his clients until they plead innocent or are found so by the courts.

“And once someone is accused, the law says that that person is innocent until proven guilty or the person pleads otherwise.”